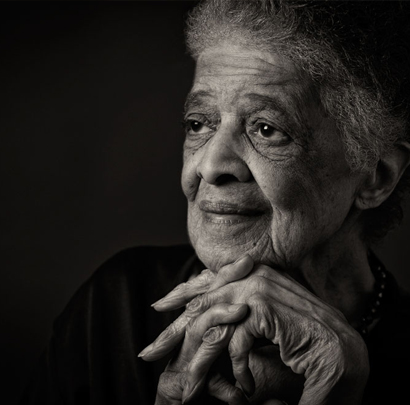 Vel Phillips achieved many firsts, including first woman and first African American to be elected to the statewide office of secretary of state.

Vel Phillips, born Velvalea Rodgers, grew up on Milwaukee’s south side and graduated from North Division High School. She received a national scholarship to attend Howard University, where she earned a bachelor of arts degree. In 1951, she was the first Black woman to graduate from UW-Madison Law School. Five years later, Phillips became the first woman alderman elected to the Common Council of Milwaukee. She fought tirelessly for fair housing policies to protect minorities from discrimination when buying or renting homes. She was active in the League of Women Voters and the NAACP, and she participated in many non-violent demonstrations for civil rights. With Father James Groppi, the advisor to the NAACP Youth Council, she brought national attention to Milwaukee’s civil rights movement when she organized community members to demonstrate for more than 200 days in support of fair housing legislation.

In 1971, Phillips resigned as an alderperson when Governor Patrick J. Lucey appointed her as the first woman judge in Milwaukee County and the first African American to serve in Wisconsin’s judiciary. She achieved another first in 1978 when she was elected secretary of state of Wisconsin. One other woman, Glenn Wise, had held that seat previously, but Wise had been appointed rather than elected. Although Phillips was not re-elected in 1982, she secured a prominent place in Wisconsin history, and her fight as a community organizer for civil rights in Milwaukee continued into the 21st century.

Stingl, Jim. “Stingl: We were lucky to have Vel Phillips in Milwaukee, and for a year longer than we thought.” Milwaukee Journal Sentinel, April 23, 2018. https://www.jsonline.com/story/news/columnists/jim-stingl/2018/04/20/stingl-we-were-lucky-have-vel-phillips-milwaukee-and-year-longer-than-we-thought/534222002/.