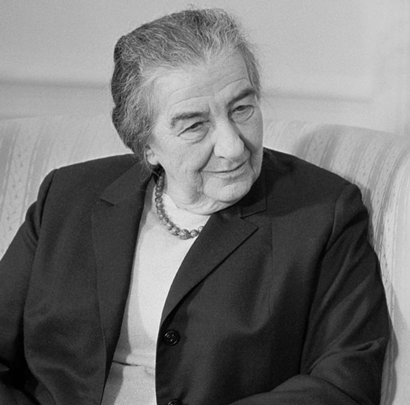 Golda Meir was a teacher and organizer in Milwaukee before becoming Israel's first female prime minister in 1969.

Born in Kyiv, Golda Meir and her family fled Jewish persecution and moved to Milwaukee in 1906. She graduated at the top of her class from the Fourth Street School in 1912, and eventually became a teacher at a Folk-Schulen (folk school) where she taught Yiddish. She was active in the Zionist community in Milwaukee before moving with her husband to British-controlled Palestine in 1921.

In 1948, Meir participated in the signing of the Israeli Declaration of Independence and was also appointed Israel’s minister to Moscow. The following year, she became the first minister of labor, a position she held until 1956, when she was appointed foreign minister. In 1965, Meir became secretary-general of Mapai, Israel’s dominant political party. When the prime minister of Israel died in 1969, the Labor Party supported Meir to take his place. She became Israel’s first female prime minister and the third woman prime minister in the world. As prime minister, she was the principal negotiator between the Jews, the Palestinians, and the British Government during the Zionist movement in Palestine.