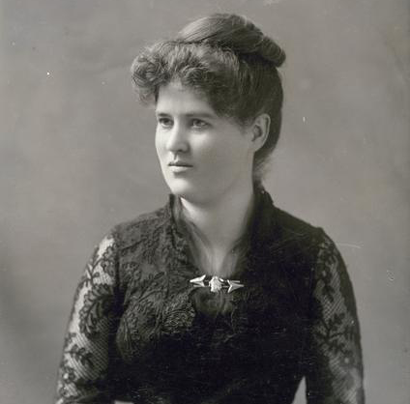 Belle Case La Follette was the first woman to graduate from law school in Wisconsin and an outspoken advocate for women's right to vote.

Born Belle Case in Summit, La Follette moved with her family to a farm in Baraboo, where she grew up. At age 16 she started attending UW-Madison, where she met her husband, Robert. Already a skilled orator, she delivered a prize-winning commencement speech when she graduated in 1879. She then taught high school in Spring Green while her husband continued on to get his law degree. La Follette would often help her husband with court cases, and in 1883 she began taking law classes herself. In 1885 she became the first woman to earn a law degree from the University of Wisconsin Law School.

La Follette believed that women should have the right to vote, and she was a strong advocate for peace and equality. When her husband ran for Congress, governor, the U.S. Senate, and then the presidency, she helped write his speeches and manage his campaigns. She co-edited La Follette’s Weekly Magazine, which later became The Progressive, and wrote a column for it called “Home and Education.” In 1915 helped found the Woman’s Peace Party, which later became the Women’s International League for Peace and Freedom. La Follette led meetings, rallies, and parades to help teach others about living peacefully and treating individuals equally. She traveled the country speaking out for women’s right to vote, which became law in 1920. When her husband died in 1925 while still in office as a U.S. senator, she was asked to take his place, but she declined, and her son Robert La Follette, Jr., filled the vacancy instead. Her other son, Phillip, later served three terms as Wisconsin’s governor, and her daughter Fola was a well-known suffragist, labor activist, and actress.