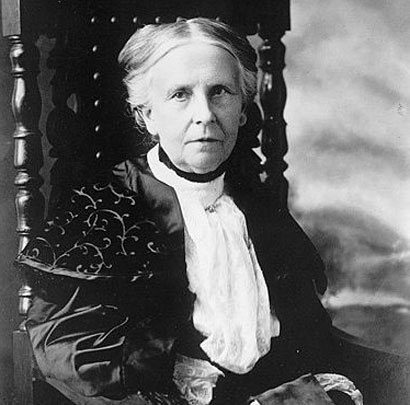 Olympia Brown was the first woman to be ordained a minister in the U.S. and was president of Wisconsin’s Woman Suffrage Association for 28 years.

Olympia Brown was born in a log cabin in Prairie Ronde, Michigan. After being educated locally, she began teaching school at age 15, then searched for a college that would admit her. Refused entrance to the University of Michigan because she was a woman, she attended Mount Holyoke College in Massachusetts for a year, and went on to receive her bachelor’s degree from Antioch College in Ohio in 1860. She then searched for a divinity school to accept her and was admitted to St. Lawrence University in Canton, New York. Brown was among the first women to graduate from college in the U.S., and she became the first woman minister in the U.S. in 1863 when she was ordained in the Universalist Church.

Brown held pastorates in several cities before arriving at Church of the Good Shepherd in Racine, Wisconsin, a position she left in 1887 to focus on working for women’s suffrage. She served as president of Wisconsin’s Woman Suffrage Association from 1884 to 1912. She campaigned across the country to amend state constitutions to allow women the right to vote, but soon grew frustrated at the slow progress of state-by-state change and began working with a group of suffragists on passing a federal constitutional amendment to grant voting rights to all women in the country. Brown was among the 1000 women who marched on Washington to call on President Woodrow Wilson to take action. She lived to see the 19th Amendment pass in 1920.