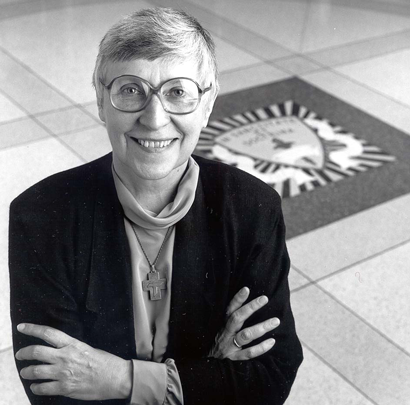 Sister Joel Read served for 35 years as president of Alverno College and became widely known and respected for her innovative education reforms.

Joel Read, a member of the School Sisters of St. Francis, was born December 30, 1926, in Chicago, Illinois. She earned a bachelor’s degree in education from Alverno, a Catholic women’s college in Milwaukee, in 1948. She went on to study history at Fordham University in New York, and then joined the faculty of Alverno College as a history professor in 1955.

Read became Alverno College’s sixth president in 1968, and she served for 35 years, longer than any other president in the school’s history. Under her leadership, the college started many programs to meet its students’ needs in new and creative ways. Read introduced a curriculum based on developing skills in thinking and learning, and she made it a priority for students to have one-to-one support from faculty. She also got the college to start offering weekend classes so women with families or careers could attend more easily, and she created one of the country’s first internship programs, in which students could get experience as leaders in professional settings.