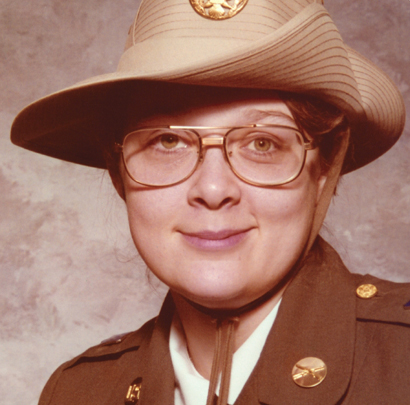 Miriam Ben Shalom was a drill sergeant in the U.S. Army before being discharged for her sexual orientation; she was later the first LGBT serviceperson ever reinstated.

Born in Waukesha to a Roman Catholic family, Miriam Ben Shalom lost her mother at an early age and was raised primarily by her father, a World War II veteran. After graduating from high school, she was married briefly and had a daughter. She converted to Judaism and moved to Israel with her daughter to become a citizen and join the Israeli Army. After returning to Wisconsin, she earned her undergraduate and graduate degrees in creative writing from the UW-Milwaukee. She enlisted in the U.S. Army in 1974 and was one of the first two female drill sergeants to graduate from the 84th Division of the U.S. Army Reserve. Active in the LGBT community of Milwaukee, Ben Shalom was open about her sexual orientation with her commander, who did not move to discharge her even though the military had a strict ban against gay soldiers at that time. But when a local news reporter asked her how it felt to be a gay person in the military, her response caught the attention of her superiors. She was discharged after two years of her three-year tour of duty.

Ben Shalom appealed the decision, and in 1980, after a long battle in the courts, a federal judge ordered the U.S. Army to reinstate her, ruling that Ben Shalom’s discharge violated her constitutional rights of free speech and free association. The Army refused to comply until an appeals court threatened to fine the Army for contempt of court. Ben Shalom was reinstated in 1987 to finish her original tour of duty, becoming the first LGBT serviceperson ever reinstated after being discharged. When she tried to re-enlist, however, the Army put up more of a fight, and Ben Shalom again went to court. Her military hopes ended in 1990, when the U.S. Supreme Court refused to hear her appeal. Ben Shalom spent the next 20 years fighting the military’s policies against gay soldiers. The outright ban was replaced in 1993 with a compromise that came to be known as “Don’t Ask, Don’t Tell,” which was successfully repealed in 2010.