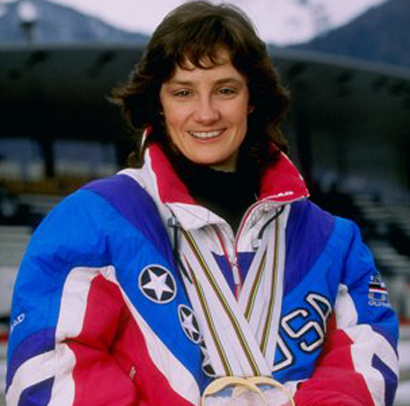 Bonnie Blair is a world record-holding speed skater, a six-time Olympic medalist and the most decorated woman in Winter Olympic history.

Bonnie Blair was one of the top speed-skaters of her time. After graduating from high school in Illinois, she moved to Milwaukee to train with the U.S. national speed-skating team. She went on to compete for the U.S. in four Olympics: In the 1988 Winter games, she won her first gold medal in the 500-meter race and also set the world record. She won gold in both the 500- and 1,000-meter races in 1992, and again in 1994, when she finished .36 seconds ahead of the second-best time in the 500-meter and 1.38 seconds ahead of second-best in the 1,000-meter race — the largest margin of victory in the history of the speed-skating event. Blair also became the first American woman to win five gold medals at any Winter Olympics.

Blair is a member of both the Wisconsin Athletic Hall of Fame and the Chicagoland Sports Hall of Fame. In 2004, she was also elected to the United States Olympic Hall of Fame, and at her induction she was the most decorated U.S. Winter Olympian of all time. After retiring from competitive speed-skating, Blair became a motivational speaker and founded the Bonnie Blair Charitable Fund.

Schwartz, Larry. “Blair is special… but she doesn’t know it.” ESPN.com. https://espn.go.com/sportscentury/features/00014107.html.