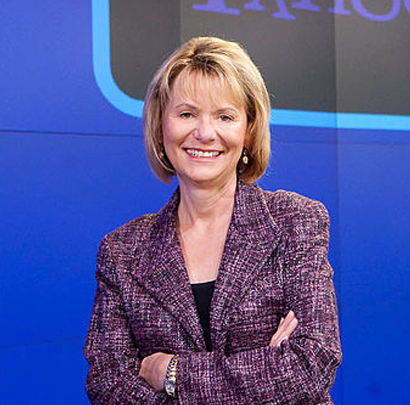 Carol Bartz is the former president and CEO of the internet company Yahoo!

Carol Bartz was born in Winona, Minnesota. After losing her mother at a young age, she moved with her brother to her grandparent’s farm in Alma, Wisconsin. She took a job at a bank at age 15 to help support her family. Good grades in high school earned her a scholarship to William Woods, a prestigious all-girls college in Missouri. She transferred to UW-Madison and worked her way through college as a waitress. In 1971, she earned her degree in computer science.

When Bartz joined the manufacturing company 3M in 1972, she was the only woman professional in a division of 300 men. She faced frequent discrimination, and in 1976 she quit after being refused a transfer to headquarters. “Women don’t do these jobs,” Bartz later recalled being told. She was recruited by Sun Microsystems, and then, in 1992 was named CEO of Autodesk, Inc., a mid-sized computer software company. Within days of starting in her new role, Bartz was diagnosed with breast cancer, but she refused to take more than a month off for treatment. She beat cancer, and under her leadership, Auto Desk increased its annual revenue from $285 million to more than $1.5 billion. In 2009, Bartz became CEO of Yahoo!, a Fortune 500 internet company, where she promptly restructured the organization while cutting positions, reinforcing anti-discrimination policies, and investing in innovation. Her approach did not please the company executives, however, and she was fired less than three years later. She went on to serve on the board of directors for the software giant Cisco.