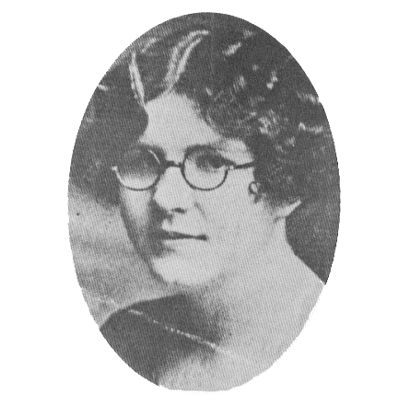 Mildred Barber was one of the first three women elected to the Wisconsin Legislature.

Barber was born in Greenwood in 1902 and attended public school in Marathon. She earned a teaching degree at the Stevens Point Normal School and taught in Marathon County for two years.

Barber was the first Wisconsin woman to attend a political convention as a delegate, and she was elected secretary of the Republican platform convention in 1924. That year she also ran for the Wisconsin State Assembly on a progressive liberal platform, and won. She credited her victory to her opponent’s Prohibitionist stance, which was not popular in Marathon County at the time. Just a few years after women had earned the right to vote, Barber (age 23), Helen Brooks, and Helen Thompson were the first women elected to the Wisconsin Legislature. At that time Barber’s father was an elected member of the Wisconsin State Senate, and they became the first father-and-daughter pair in the history of the U.S. to serve together in a state legislature. As a representative to the Wisconsin State Assembly, Barber proposed an amendment to a state eugenics law that would include women in mandatory medical examinations aimed to determine if an individual was “suitable” to have children. She also served on a committee that inspected state prisons. After her time in office, she worked in Wisconsin as a schoolteacher.