THEIR STORIES. OUR LEGACY.
This Wisconsin artist designed some of Walt Disney Studios' most recognized characters.
Learn more about Joyce Carlson 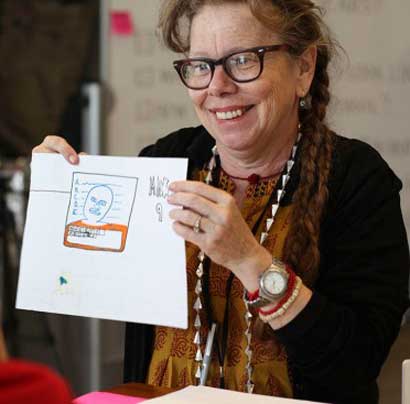 Lynda Barry, assistant professor of interdisciplinary creativity at the UW-Madison, is a celebrated cartoonist, author, speaker, and instructor.

Lynda Barry was born in Richland Center in 1956, but spent much of her childhood in Seattle, Washington. In her teens she worked as a hospital janitor, a subject that inspired her early poetry. She remained in Washington to attend Evergreen State College, where her work was influenced by the instruction of the painter Marilyn Frasca. Barry also met Matt Groening—creator of The Simpsons—at Evergreen State College, and he became an early fan and supporter of her talent.

Barry graduated from college in 1978. The next year, she began writing a comic strip called Ernie Pook’s Comeek. The strip became wildly popular and ran for 30 years; at its peak it was published in 75 newspapers nationwide. As her popularity rose, Barry also published a number of book-length graphic works: these include her first novel, The Good Times are Killing Me, a coming-of-age story about a biracial friendship; the darker Cruddy, One! Hundred! Demons!, which she calls an “autobifictionalography”; What It Is, about her creative process; and Syllabus: Notes From an Accidental Professor, about her teaching process. She has been interviewed several times on National Public Radio and had her work published in Mother Jones Magazine, Mademoiselle, Salon, and Esquire. Barry is also a very popular speaker and teacher. Her creativity workshop “Writing the Unthinkable,” which fills up quickly, was featured in The New York Times in 2011. In 2013 she became assistant professor of interdisciplinary creativity at the UW-Madison, where she encourages students to call her “Professor Old Skull.”

Rueckert, Veronica. “Getting In Touch With Your Inner Artist.” Wisconsin Public Radio, March 27, 2014.