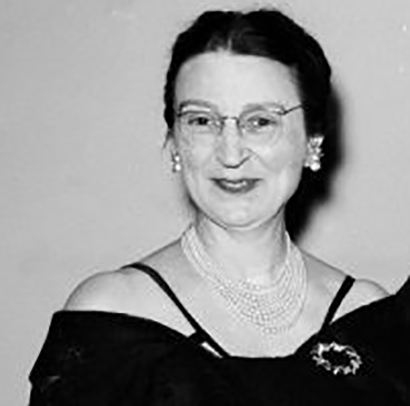 Before Ineva Reilly Baldwin championed the “Wisconsin Idea,” she was a U.S. Coast Guard lieutenant commander during World War II—the highest rank ever attained by a woman at that time.

Ineva Reilly Baldwin received her undergraduate education at the UW-Madison, the University of Colorado, and the University of Geneva in Switzerland, and then earned a master’s degree in botany at the UW-Madison. During World War II, Baldwin enlisted in the U.S. Coast Guard Reserve and became a lieutenant commander, the highest rank achieved by a woman at that time. After serving, Baldwin returned to the UW-Madison, where she was the assistant dean of women from 1941 to 1942 and then, from 1946 to 1954, first the assistant dean and then the associate dean of the College of Letters and Science.

Baldwin and her husband, Ira, created the Wisconsin Idea Endowment fund to help faculty, staff, and students share the University of Wisconsin’s knowledge and resources around the world and bring knowledge from the world back to the university. The fund helps to promote the “Wisconsin Idea,” which is the philosophy that the work done at Wisconsin’s state universities should benefit the people of the state, the nation, and the world.

“About the Baldwins.” Ira and Ineva Reilly Baldwin Wisconsin Idea Endowment. University of Wisconsin-Madison Office of the Provost. http://provost.wisc.edu/baldwin-about.htm.