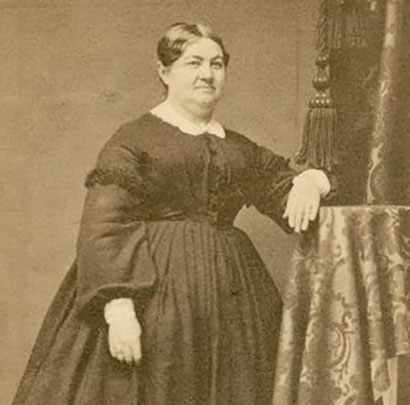 Elizabeth Baird’s newspaper stories about the developing Green Bay area in the 1800s were among the earliest written accounts of life in Wisconsin.

Elizabeth Baird was born Elizabeth Fisher in Prairie du Chien, nearly 40 years before Wisconsin became a state. Her aunt and her grandmother were successful fur traders, and her grandmother was a descendant of an Odawa chief. In 1812, when she was two, she moved to Mackinac Island (Michigan) with her mother, who opened a school there for fur traders’ daughters. There, at the young age of 14, Baird met and married her husband, a lawyer, and the couple moved to a developing area in the Wisconsin Territory known as Green Bay. Her husband was the area’s first practicing lawyer.

Baird, who spoke fluent French and Odawa, taught herself English to communicate with her new neighbors in the growing settlement of Green Bay. She learned quickly and eventually became a translator at her husband’s law office. She also began to write about life in the Green Bay area. In 1832, the Bairds moved to a farm, and Elizabeth took over its management and raised their four daughters. When the federal government began selling deeds in the Green Bay area, the resulting work in her husband’s law office increased so much that Baird stepped in to be the recorder of deeds. After the 1871 Peshtigo fire in northern Wisconsin, people from all over the country sent relief supplies, and she distributed them to the town’s survivors.

Baird’s writings about her childhood, the development of Green Bay, and the nearby Ho-Chunk and Menominee Indians were originally published as articles in the Green Bay State Gazette and later edited for Wisconsin Historical Collections. She lived in Green Bay until her death in 1890.