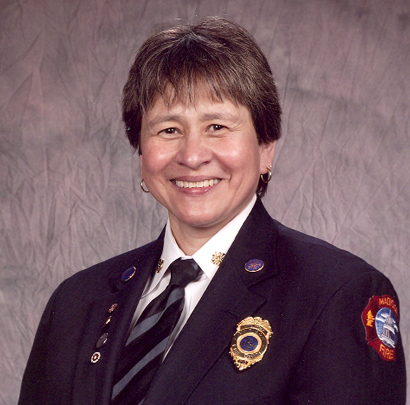 Debra Amesqua was the first woman chief of the Madison Fire Department and one of the first women fire chiefs in the country.

Debra Amesqua, born Debra Jane Hernandez, grew up in Tallahassee, Florida. Her parents were migrant famers with roots in Mexico who enjoyed music. Her early exposure to music influenced her to study the clarinet and guitar at Florida State University (FSU), making her the first person in her family to attend college. Amesqua left FSU before graduating, and in 1983, she became a firefighter. She served as a trainer in Tallahassee before relocating to Madison, Wisconsin.

Amesqua, who became Madison’s first woman fire chief in 1996, was only the seventh woman in the country to lead a fire department. She faced strong opposition during her first years as chief but gradually earned the respect of her department. Chief Amesqua oversaw nearly 400 personnel and 12 stations including the opening of two new stations (the first in 25 years). Under her leadership, Emergency Medical Services protocol improved throughout Dane County, and the emphasis on fire prevention strengthened. As a result, the City of Madison recorded only one fire fatality in three and a half years, compared to the national average of seven to eight fatalities in a three-year span. Amesqua received numerous awards during her career, including Chief of the Year by the Wisconsin State Fire Inspectors Association. After 16 years as the Madison fire chief, she retired in 2012.