THEIR STORIES. OUR LEGACY.
She played for the Racine Belles in the All-American Professional Girls Baseball League.
Learn more about Margaret Danhauser Brown 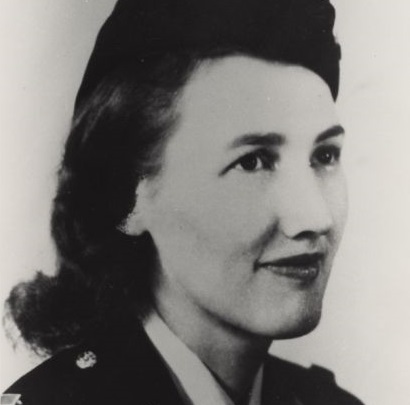 Ellen Ainsworth, a nurse in the US Army Nurse Corps, was the only woman from Wisconsin to die from enemy fire in World War II.

Ellen Ainsworth was born in 1919 and raised in Glenwood City, Wisconsin. She graduated from nursing school in Minneapolis in 1941. In March 1942 she enlisted in the U.S. Army Nurse Corps, in which she served as Second Lieutenant. She served in Tunisia, a country in North Africa, before being sent to Anzio, Italy, where American and British troops were planning a surprise attack on Germany. The 56th Evacuation Hospital she worked in was hit by a German artillery shell on February 10, 1944. Despite being struck in the chest by a piece of shrapnel, Ainsworth and three other nurses worked to evacuate forty-two patients to safety.

Six days after the attack, Ainsworth died from her injuries. She was buried in the Sicily-Rome American Cemetery and Memorial in Nettuno, Italy. After her death she was awarded the Red Cross Bronze Medal, a Purple Heart medal, and, along with the other nurses involved in the attack, the Silver Star medal — the third-highest honor awarded by the military — for bravery. These nurses were the first women to receive this commendation from the Army. A residence hall at the Wisconsin Veterans Home in King, Wisconsin, a health clinic at Fort Hamilton in Brooklyn, New York, a conference room at the Pentagon, and the American Legion Post in Glenwood City are named for Ainsworth, who was the only woman from Wisconsin to die from enemy fire in World War II.