THEIR STORIES. OUR LEGACY.
Ellen Ainsworth, a nurse in the US Army Nurse Corps, was the only woman from Wisconsin to die from enemy fire in World War II.
Learn more about Ellen Ainsworth 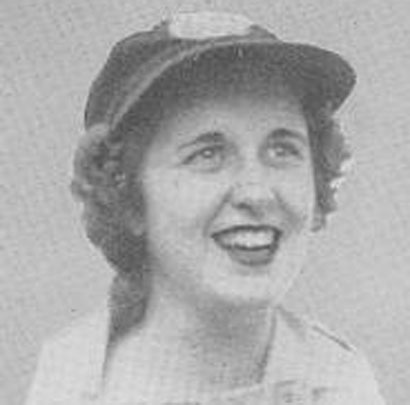 Margaret Danhauser was born in Racine, WI, on June 9, 1921. She is best known for her performance as a member of the Racine Belles All-American Girls Professional Baseball team. The women’s league was created in Spring 1942 because of concerns that baseball enthusiasm would fade with so many male baseball players drafted to fight in World War II. Philip K. Wrigley, chewing gum tycoon and owner of the Chicago Cubs, was the league’s major backer. The initial four teams represented cities close to the league headquarters in Chicago: Racine and Kenosha, Wisconsin; Rockford, Illinois; and South Bend, Indiana. Danhauser, who had played on two state championship teams (in 1936 and 1937), was the first Racine native to play for her hometown team in the league. As a first base player for the Belles, she had a .982 fielding average and a .144 batting average. In the league’s first year in 1943, the Racine Belles beat the Kenosha Comets three games to zero in a best-of-five series to win the first All-American Girls Professional Baseball League World Championship.

Danhauser played eight seasons for the Belles before refusing to relocate with the team from Racine to Battle Creek, Michigan. She later married and changed her last name to Brown. Margaret Danhauser Brown died on January 6, 1987.

Fidler, Merrie A. The Origins and History of the All-American Girls Professional Baseball League. McFarland & Co., 2010.