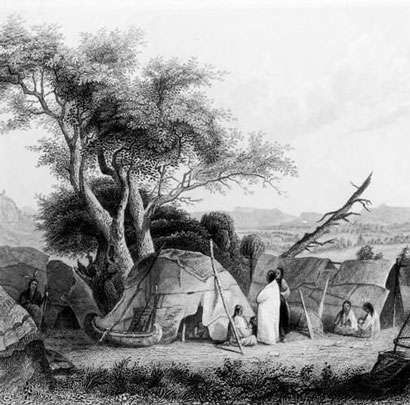 Ho-poe-kaw
Glory of the Morning

Ho-poe-kaw, which translates to “Glory of the Morning,” was a Ho-Chunk chief in the 1700s.

The Ho-Chunk were some of the first people known to live in Wisconsin. Ho-poe-kaw was the first individual woman ever documented in a historical record — one written by an English traveler in 1766 — although previous travelers through the area had mentioned Native women generally in their accounts. According to oral history, Ho-poe-kaw was the daughter of a powerful Ho-Chunk chief. Around 1727, she was selected to succeed him and lead the largest Ho-Chunk village, which was east of Lake Winnebago near modern-day Neenah. A year later, she married a French officer named Sabrevoir Descaris, who was in Wisconsin fighting in the Fox War. He resigned his commission with the French army and lived as a fur trader.

Under Ho-poe-kaw’s leadership, the Ho-Chunk sided with the French against the Meskwaki in several battles during the Fox War. Ho-poe-kaw’s husband left with their daughter after several years and enlisted in the French army against the British over Canadian territory, and he died in battle. Ho-poe-kaw stayed in her tribal land with her two sons and led her people for about forty years. Although her daughter never returned, both of Ho-poe-kaw’s sons succeeded her as chief during the turbulent times of the Ho-Chunk’s forced relocation from Wisconsin by the U.S. government. Ho-poe-kaw’s descendants, known as the Decorahs (an alternate spelling of their paternal last name), became one of the most prominent Ho-Chunk families and served as diplomats in treaty agreements with the U.S.