THEIR STORIES. OUR LEGACY.
This community activist and educator cofounded the first Spanish-language immersion school in Madison.
Learn more about Debora Gil Casado 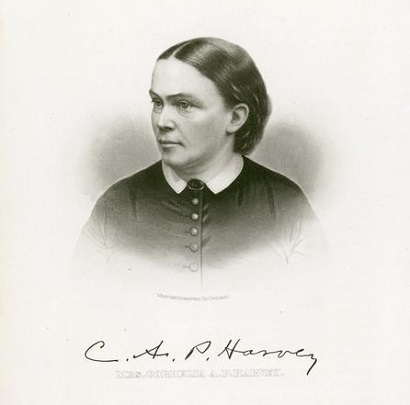 Cordelia Harvey became known as the Wisconsin Angel for her work as a nurse and advocate for soldiers during the U.S. Civil War.

Cordelia Harvey, who was born Cordelia Perrine in 1824, lived in upstate New York before moving with her family to what was then called Southport (now Kenosha), Wisconsin, in 1840. She became a schoolteacher at the age of 16, and in 1847 she married Louis P. Harvey, the principal of her school. The couple’s only child, Mary, died at age four from scarlet fever.

Louis Harvey served as a state senator and as secretary of state before being elected governor of Wisconsin in 1861, the same year that the U.S. Civil War began. Governor Harvey took office on January 6, 1862. As Wisconsin’s First Lady, Cordelia Harvey served as the president of Madison’s Ladies Aid society, which raised money and made bandages, clothing, and bed supplies to help soldiers. In April of 1862, Governor Harvey accidentally drowned in the Tennessee River during a trip to visit wounded Wisconsin soldiers. Edward Salomon, who had been lieutenant governor under Louis Harvey, then became governor.

Still in 1862, Governor Salomon appointed Cordelia Harvey to be the “sanitary agent” for Wisconsin troops. Her job was to visit Wisconsin soldiers in military hospitals in southern states and recommend ways their care could be improved. She was nicknamed “Wisconsin Angel” because of her devotion to comforting and caring for soldiers at hospitals that were often understaffed and overcrowded. She spent much of her time lobbying on behalf of Wisconsin soldiers who were too ill to ever return to the battlefield; she believed they should be discharged and sent home. She also became concerned about the hot, putrid air at the battlefield hospitals and wanted to open a military hospital in Wisconsin where soldiers from this state could go to recover. Harvey met with President Abraham Lincoln in 1863 and gave him a petition that 8,000 Wisconsin residents had signed in support of her proposal. The President disagreed with her; he thought that if soldiers were sent north, close to their homes, they would desert the Union Army after they recovered. After Harvey argued with him for several days, however, President Lincoln changed his mind. He described Harvey as “a lady of intelligence” who “talks sense.” The Harvey Hospital opened in Madison in October 1863 with 106 patients and operated until the summer of 1865. Two more military hospitals were later opened in Milwaukee and Prairie Du Chien as a result of Harvey’s efforts.

In 1865, Harvey visited military hospitals in the South again and returned to Wisconsin with six orphans whose fathers had been killed in the war. She turned Harvey Hospital into an orphanage called the Soldiers’ Orphans Home; she was the superintendent of the orphanage for a year and a half. During the years 1866–1874, the Soldiers’ Orphans Home housed a total of 683 children.

In 1876, Harvey married the Reverend Albert Chester. The couple lived in Buffalo, New York, and Harvey began teaching again. After her husband died in 1892, she returned to Wisconsin, where she died in 1895.