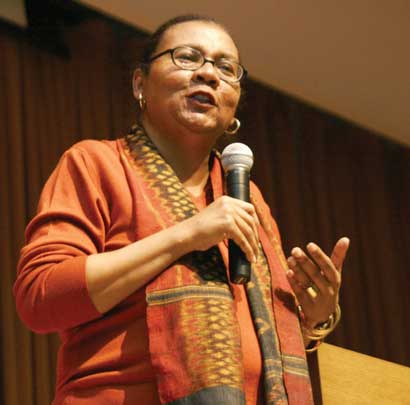 Best known for her work on gender, race, and class, University of Wisconsin graduate bell hooks was a prolific writer, speaker, and scholar.

bell hooks, who was born Gloria Jean Watkins to working-class parents in a racially segregated Kentucky community, later adopted the pen name bell hooks (intentionally lowercase) in tribute to her grandmother. An avid reader at a young age, she published her first poems in a Sunday School magazine. After graduating from high school, she studied English at Stanford University in California. She started writing her first book — Ain’t I a Woman: Black Women and Feminism, which examines racism and sexism from a Black woman’s perspective — when she was only 19; it became an influential feminist work when it was later published. hooks earned a master’s degree in English literature from UW-Madison in 1976 and taught college courses for several years before earning her doctorate from University of California, Santa Cruz, in 1983. She later taught at Yale University, Oberlin College, and City College of New York. In 2004, she was named Distinguished Professor in Residence in Appalachian Studies at Berea College in Kentucky, where she remained for the remainder of her career.

hooks wrote dozens of books. Many of them look at the connections — rather than the differences — among various kinds of oppression; one example is Feminism is for Everybody: Passionate Politics. She also wrote memoirs, volumes of poetry, and several children’s books focused on raising self-esteem — including Happy to Be Nappy, which praises Black girls’ hair. Her work, which also touches on love and spiritual healing, appeals to a wide range of people, and she often spoke to packed audiences. hooks’s life and work were celebrated in a “year of bell hooks” in 2014, at St. Norbert College in De Pere, Wisconsin. In 2015 she returned to St. Norbert for a weeklong residency that included a public dialogue with another famous feminist, Gloria Steinem.

Cooper, Brittney. “Reaching for bell hooks in the Darkness.” The Cut. December 16, 2021. https://www.thecut.com/2021/12/reaching-for-bell-hooks-in-the-darkness.html