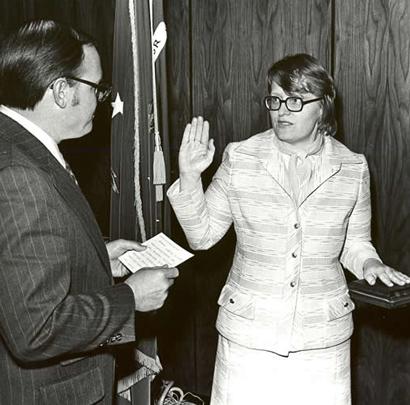 Carin Clauss was the first woman Solicitor in the U.S. Department of Labor.

Carin Clauss was born in Tennessee and received her B.A. from Vassar College in 1960. In 1963, she graduated from Columbia Law School, where she was one of six women in a class of 320 students. She then began her legal career in the U.S. Department of Labor in Washington, D.C., and eventually served as Solicitor there from 1977 to 1981.

In the Office of the Solicitor (SOL) – the chief legal office of the Department of Labor — Clauss was responsible for enforcing the nation’s labor laws. She helped develop the department’s litigation strategy for the enforcement of the Equal Pay Act of 1963 and took on 35 cases that built the framework for financial equality for men and women in the workplace. In one significant case, she negotiated to open up exclusively male or female jobs at AT&T to both men and women. She also helped eliminate wage disparities affecting women managers working at AT&T, and ensured that Occupational Safety and Health Administration standards were established in workplaces to protect women’s reproductive health. After her work with the Department of Labor, Clauss taught at the UW-Madison Law School, where she specialized in labor and employment law and administrative law and civil procedure.