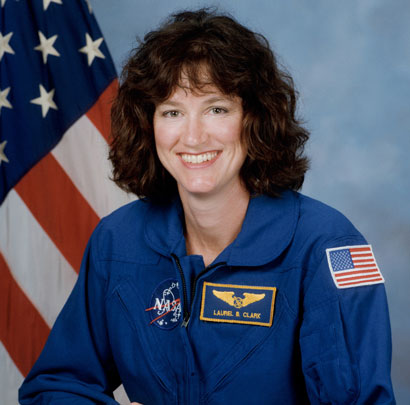 Laurel Clark was an accomplished doctor, U.S. Navy captain, and NASA astronaut who died aboard the space shuttle Columbia in 2003.

Laurel Clark grew up in Racine and graduated from William Horlick High School. She enrolled at the UW-Madison, where she completed a bachelor’s degree in zoology in 1983 and a doctorate in medicine in 1987. She joined the U.S. Navy and underwent extensive training as an undersea medical officer. Assigned as medical department head for a submarine squadron, she performed numerous dives to evacuate U.S. submarines in medical emergencies. “I joined the Navy and was exposed to a lot of different operational environments, working on submarines and working in tight quarters on ships, and learning about radiation medicine,” Clark recalled. After that assignment, she trained in aeromedicine and became a naval flight surgeon, practicing medicine in the most challenging environments.

NASA selected Clark for astronaut training in 1996. Although she qualified for flight after two years of training, she worked for several years in the Astronaut Office Payloads/Habitability Branch before going on her first flight in January 2003, as a mission specialist aboard the space shuttle Columbia on its STS-107 mission. On the 16-day mission, the STS-107 crew successfully conducted more than 80 experiments, including astronaut health and safety studies and technology development, and Clark helped create an astronaut treadmill for the international space station. As it returned to Earth on February 1, 2003, however, the Columbia broke apart over Texas during re-entry, just 16 minutes before it was due to land in Florida. Clark and the six other crew members of the STS-107 mission perished.