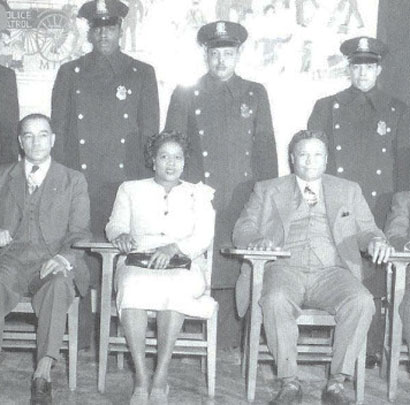 Gallimore, born Vernice Evelyn Chenault, grew up in Kentucky and attended Spelman College in Atlanta, Georgia. She earned a master’s degree in social work from Atlanta University. During World War II, Vernice met and married sailor Ulysses Gallimore, Jr., and moved to Milwaukee to be closer to her husband. In 1946, Gallimore became the first African American policewoman to serve with the Milwaukee Police Department. “She was a force to be reckoned with in the best sense of the word,” recalled one of Gallimore’s colleagues.

After the birth of her first child in 1955, Gallimore was not allowed to continue serving as a police officer. She later became a probation officer, a role in which she visited schools to teach cultural awareness and served as a mediator between white teachers and minority students. Gallimore was an active member of the Vel Phillips YWCA and the A.M.E. Church. She was also a charter member and chairwoman of the county’s Human Rights Commission.