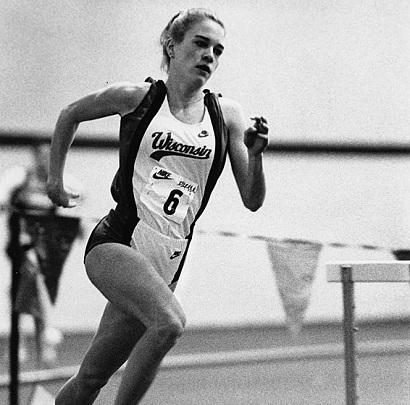 Suzy Favor Hamilton is a record-breaking runner, a three-time Olympic athlete, and a vocal advocate for mental health.

Suzanne “Suzy” Favor was born in 1968 in Stevens Point, Wisconsin. She realized at a young age that she loved running; after winning a race in fifth grade, she thought, “This is what I want to do with my life.” By the time she graduated from high school in Stevens Point, she was an eleven-time state champion and had earned more medals than any other high school runner, male or female. Scholastic Sports Magazine named her one of the top hundred high school athletes of the century.

In 1987, Favor started running for the University of Wisconsin–Madison, where she earned numerous awards, including 9 individual NCAA titles and 23 Big Ten titles (21 of which were individual). She was a 14-time All-American for track and cross country, was designated Wisconsin’s Female Athlete of the Year every year from 1987 to 1990, and was honored as the Big Ten Female Athlete of the Decade in 1991. She continued her running career after she graduated from the UW–Madison in 1991. When she married in 1991, she added her husband’s last name (Hamilton) to hers, although she continued to compete using just her own last name (Favor).

As a professional runner, Favor Hamilton won seven U.S. National Championships and competed in three different Olympic games: 1992 in Barcelona, 1996 in Atlanta, and 2000 in Sydney. But competition became very stressful for her. She didn’t win medals in any of her Olympic races, and in her final Olympic competition in 2000, she fell in her final turn of the 1500-meter race. For many years, she allowed people to believe her fall had been caused by dehydration and previous injuries, but eventually she admitted to falling on purpose. She explained that as she was passed by three other runners and realized she would not win a medal, she had an attack of panic and intense anxiety and thought to herself, “Just fall,” and she did. In that moment, the idea of being pitied seemed easier than dealing with the disappointment of all those who supported her.

Favor Hamilton has struggled with mental illness for much of her life. In the year before that final Olympic race, her brother, who had suffered from bipolar disorder died from suicide. Favor Hamilton suffers from bipolar disorder too, but she wasn’t diagnosed until 2012. Extreme high and low moods are associated with bipolar disorder, but Favor Hamilton believes that before her diagnosis, her strict training had helped keep her moods level. After her running career ended, she was misdiagnosed with depression, but the medication she was given did help her for a while, and she made many strides in her personal life. She and her husband had a daughter and opened a real estate business. She also became a mental health advocate, and in 2010 she was the official spokesperson for Prevent Suicide Wisconsin. Unfortunately, her wrong diagnosis, along with a change in medication, led to many harmful side effects that she was unable to control. She went through a very dark period of her life that almost ruined her family and reputation. Eventually, she was correctly diagnosed with bipolar disorder and given appropriate treatment. After that, she worked hard to put her life back together, and she has rededicated herself to mental health advocacy.

In 2015, Favor Hamilton published her memoir, Fast Girl: A Life Spent Running from Madness. Now she travels around the country giving speeches about living with bipolar disorder and removing the shame connected to mental illness.