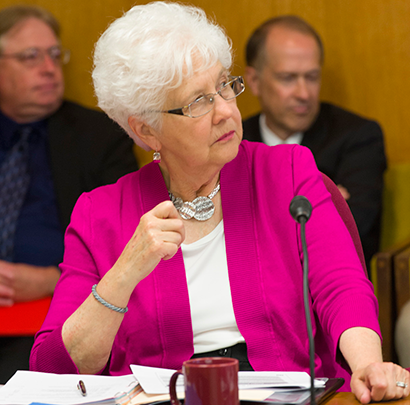 Margaret Farrow was the first woman to serve as lieutenant governor in Wisconsin.

Margaret Farrow attended Dominican Sisters of St. Catherine High School in Racine before going to Rosary College in Illinois. She earned a bachelor’s degree in political science and education from Marquette University. She began her career in government as the trustee (1976-1981) and then the president (1981-1987) of Elm Grove Village. Farrow was elected to the Wisconsin State Assembly in 1986. Three years later, she was elected to the Wisconsin State Senate from a district comprising most of Waukesha county. She was re-elected in 1990, 1994, and 1998.

In 2001, Farrow, a Republican, was appointed the 42nd lieutenant governor of Wisconsin after Scott McCallum, who had held that office, became governor upon the departure of Tommy Thompson. Farrow was the first woman to hold the office, which is the first leadership position in the line of succession after the governor of Wisconsin. Farrow spearheaded two statewide commissions to advance reforms that reduce the cost of government, and she played a leadership role in reforming welfare and tax policy to encourage work, saving, investment, innovation, capital formation, labor force productivity, and economic growth. She chaired the Wisconsin Women’s Council for several years and served as a member during her tenure as lieutenant governor. Farrow also chaired the governor’s work-based learning board and co-chaired the governor’s task force on invasive species. She has chaired the board of WisconsinEye, a public affairs television network; and from 2013 through 2017, she served on the University of Wisconsin System Board of Regents.