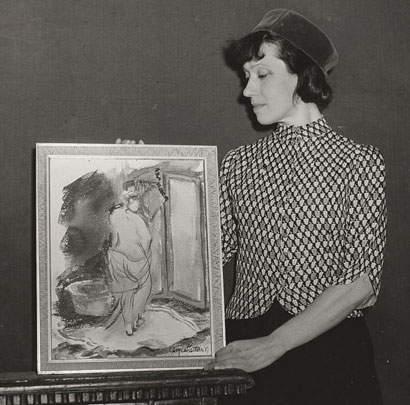 Angna Enters was a renowned dancer, who produced over 200 mime compositions.

Enters, born Anita Enters in New York City, grew up in Milwaukee, graduated from North Division High School, and took classes in design and illustration at Milwaukee State Normal School. In 1922, she moved to New York City to study under the celebrated Japanese mime choreographer and dancer Michio Itō. She performed her first piece, titled ”Ecclesiastique,” on Broadway in 1924, and the following year presented her first solo at the Greenwich Village Theatre with a budget of $25. Her career then took off as she debuted in London in 1928 and Paris in 1929. Over the next 30 years, Enters became highly regarded for her mime character development, creating 300 separate characters — including many portraits of young women — for her touring Theater of Angna Enters.

Enters was not only a dancer but also a sculptor, painter, costume designer, composer, and accomplished author. She designed all the props and costumes for her performances and composed some of the music. She also published three autobiographies, a novel, and a book about her life’s work called On Mime. Enters retired from dance in 1960 and lectured at universities across the country. She was an artist in residence at the Dallas Theater Center and Baylor University and a fellow at the Center for Advanced Studies at Wesleyan University.