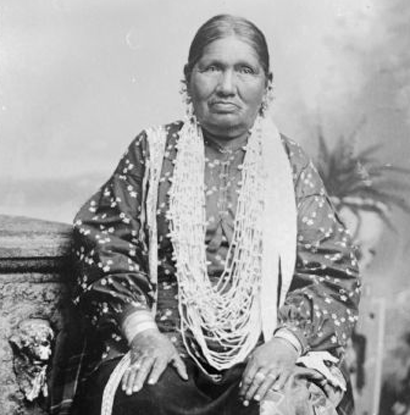 Betsy Thunder was a respected Ho-Chunk medicine woman known for her skill in making remedies from roots and plants.

Betsy Thunder was born near Black River Falls in the 1850s, although her exact birth year is unknown. She was a member of the Ho-Chunk tribe, also called the Winnebago Sky Clan. She was a descendant of the Decorah family, whose founding mother was Ho-Chunk chief Ho-poe-kaw (Glory of the Morning). Thunder married a medicine man who was much older than she was. He taught her how to collect, prepare, and administer traditional and ceremonial medicine, and hoped that she would pass the knowledge and skills on to the next generation after his death.

Thunder became well known in the area for her skill with medicine. She treated both Ho-Chunk and white patients, despite knowing little English. As was the custom for Ho-Chunk healers, Thunder received gifts of clothing, food, or blankets as payment for her work. One of her patients gave her lumber to build a small cabin in the town of Shamrock, and the people of the town built the cabin in appreciation. In the early 1900s, the U.S. government ordered Thunder’s tribe to be moved from Wisconsin to Nebraska, but she refused to leave her ancestral land. Thunder hid in the hills of Jackson County and remained in Wisconsin until her death.