THEIR STORIES. OUR LEGACY.
She co-owned the Philosopher Press in Wausau and became an expert in hand-printing books.
Learn more about Helen Van Vechten 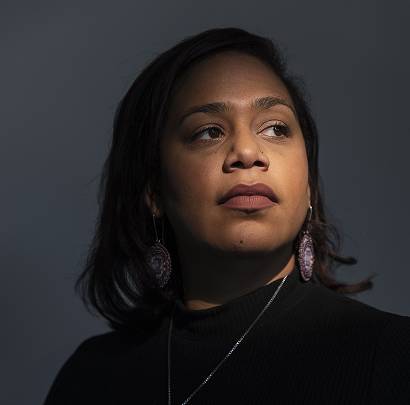 Angela Lang is a community organizer in Milwaukee and the founder and executive director of Black Leaders Organizing for Communities.

Angela Lang was born in 1989 in Milwaukee, Wisconsin, which is the one of the most racially segregated (when people of different races live separately from each other) cities in the United States. From a young age, Lang was aware of how race and class affected the lives of people in her community. After graduating from Riverside High School, Lang majored in international studies at the University of Wisconsin–Milwaukee. There she became a leader in student organizations and helped create the UW–Milwaukee chapter of the student alliance of the American Civil Liberties Union (ACLU). She was also involved in student government, serving as chief of staff, vice president, and president of her class at different points. After Scott Walker was elected governor of Wisconsin in 2010, Lang became serious about working in politics because she was inspired by the people she saw organizing in response to Walker’s anti-worker policies.

Lang’s first job after leaving college was organizing for the Service Employees International Union (SEIU), knocking on doors as part of the organization’s effort to unionize nursing home workers. After about a year, she became SEIU’s state council director. In 2016, she became the Wisconsin political director of For Our Future (FOF), a super PAC (committee that raises money for a specific cause but cannot donate that money directly to candidates or political parties) mostly funded by unions. FOF was created to help stop Donald Trump from winning in swing states (states that can be swayed to vote either Democrat or Republican in presidential elections), such as Wisconsin, in 2016. After Trump won in Wisconsin, Lang and the people she worked with knew they had to do things differently to get their communities to vote in future elections. In 2017, she met with other members of FOF and members of the progressive group Center for Popular Democracy to discuss ways to reach out to Black voters. In the end, they formed Black Leaders Organizing for Communities (BLOC), with Lang leading the organization as executive director. Less than six months later, BLOC was sending ambassadors to canvass (go out and talk to people about political issues) door-to-door on the north side of Milwaukee, an area that political canvassers often ignore.

BLOC interacts with the public outside of election seasons as well. More than winning elections, their mission is to improve the day-to-day lives of people in their communities and to help Black people use their voices and votes to assert their power within a political system that has historically shut them out. BLOC has become widely known for its silent canvass program. During a silent canvass, a candidate for political office will come with a BLOC ambassador as they canvass the neighborhood and listen to the concerns of people in the community. Candidates who have done silent canvasses include Beto O’Rourke, Cory Booker, and Julian Castro. BLOC has continued and extended its outreach during the Covid-19 pandemic. As lockdowns began in March of 2020, BLOC connected people to resources and important health and safety information and checked in on the well-being of community members.

Lang says, “We believe that the people closest to the pain are closest to the solution.” She is still executive director of BLOC as well as vice president of the ACLU of Wisconsin’s board of directors. She trusts in the power of listening and working with her community to change things for the better.