THEIR STORIES. OUR LEGACY.
She was a prominent suffragist, orator, and journalist who started a newspaper called the WOMAN’S TRIBUNE.
Learn more about Clara Bewick Colby 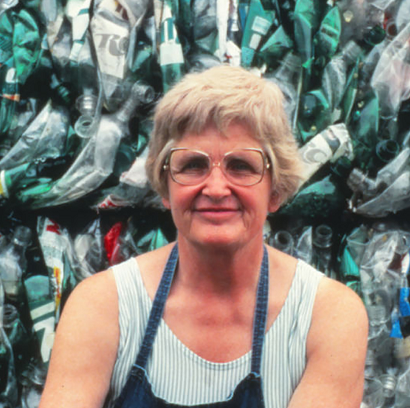 Milly Zantow was born Mildred Louise Taylor in 1923 on an Oklahoma farm. After high school, she gave up several college scholarships to care for a sister in Virginia who was sick. She took night classes there, sometimes going without eating to afford school — and when World War II broke out, she went to work for the federal agency now known as the National Aeronautics and Space Administration (NASA). In 1944 she married Wayne Stevens, and after his death in the 1960s, she married Forrest “Woody” Zantow and moved to Wisconsin. She had three sons.

Zantow got involved with the International Crane Foundation (ICF) in Baraboo in the 1970s and was the organization’s first volunteer administrator. On an ICF trip to Japan in 1978, she was impressed by their system of recycling after watching people set out sorted waste materials every day.

Back in Wisconsin, Zantow discovered that her county landfill was closing early and there was no new one ready to take its place. When she studied the heaping piles of waste material at the landfill, she noticed how much of it was plastic, so she became determined to make plastic recycling possible. She did a lot of research, figured out how to identify different kinds of plastic, and convinced a local manufacturer to use recycled plastic when making new products. Then she and her friend Jenny Ehl started a recycling collection center in Sauk County. In addition to the hard physical work of processing recyclable materials at their center, they spoke to schools and community groups, explaining the benefits of recycling and helping people set up their own local programs. They even inspired one of their volunteers, Liz Nevers, to go back to school and earn a master’s degree in recycling and solid waste management!

Zantow helped write Wisconsin’s first mandatory state recycling law, which was passed in 1990. She also developed the system that is now used worldwide to identify and separate the seven different types of plastic for recycling. (Look for the numbered triangle on the bottom of the next plastic product you buy!)

Milly Zantow died in 2014, leaving an inspiring legacy that includes her well-known saying, “Waste is not waste until it is wasted.” She was inducted into the Wisconsin Conservation Hall of Fame in April 2017.

Dart, Liese. “Plastics One through Seven: A Short Film about an Extraordinary Woman.” University of Wisconsin Extension. http://www.youtube.com/watch?v=AM6-NqmzI1I

Moser, Elise. What Milly Did: The Remarkable Pioneer of Plastics Recycling. Groundwood Books, 2016.