THEIR STORIES. OUR LEGACY.
She was a short story writer, playwright, and Pulitzer Prize–winning novelist.
Learn more about Edna Ferber 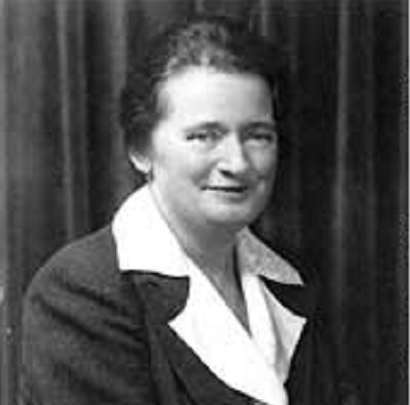 Lorena "Hick" Hickok was a journalist during the U.S. Great Depression and a close friend of First Lady Eleanor Roosevelt.

Alice Lorena Hickok was born in 1893 in East Troy, Wisconsin. (She almost never used the name “Alice.”) In 1901, her family moved to South Dakota. Her father was abusive and often unemployed, and the family often moved from town to town as he searched for jobs. Lorena’s mother died in 1906 and her father quickly got married again, but the new stepmother did not welcome Lorena, who then left home to work as a maid for other families. She had many jobs in the years that followed, some with very bad working conditions. She had to leave school for a while, but started again in the ninth grade with the help of an adult friend. In 1909, she quit her job because her employer didn’t think her education was important; she stayed with an aunt in Chicago for a few months before moving to Battle Creek, Michigan, to live with a different aunt. Hickok finished high school in Battle Creek and then started attending Lawrence College in Appleton, Wisconsin, but because of the gaps in her education it was hard for her to do well, so she left Lawrence in 1912, went back to Michigan, and began working as a “cub” or novice reporter for the Battle Creek Journal.

When she was 22, “Hick” (as she came to be known) moved to Milwaukee and began to write for the Milwaukee Journal. She was inspired by another Wisconsin woman writer, Edna Ferber. Because of sexism in the newspaper industry, though, Hickok was mostly stuck writing about “women’s issues” at the Milwaukee Journal. At age 25 she moved to Minnesota and tried one last time to finish college, attending the University of Minnesota while also working as a reporter for the Minneapolis Tribune. That newspaper gave her the opportunity to work on more serious stories, so she decided to stop going to college and be a full-time reporter. She started to become known as a journalist.

Hickok moved to New York City in 1928. First she worked for the New York Daily Mirror — a “tabloid” that wasn’t well-respected — but then she got a job doing serious reporting for the Associated Press (AP). She gained respect over her years at the AP, going from being called “that girl” by her boss to being the only female reporter assigned to the “Roosevelt Special,” Franklin D. Roosevelt’s (FDR’s) campaign train, in 1932. Hickok was especially interested in reporting on FDR’s wife, Eleanor, who she had a hunch would not be a typical First Lady. Through her reporting, Hickok formed a personal relationship with Eleanor, and by the time FDR was elected, they were very close friends. Hickok heard FDR’s famous Inaugural Address the night before he presented it to the country, but instead of “leaking” it as other reporters would, she kept it to herself.

Hickok’s friendship with the Roosevelts compromised her journalistic objectivity, meaning that it made it hard for her to be neutral in her writing about them, though it also offered some advantages. For instance, Hick was the first reporter to ever interview a First Lady at the White House on Inauguration Day. But her career as a journalist did end; she resigned from the AP in June 1933.

Hickok’s next job came through her connections with FDR. She was hired by Harry Hopkins, the head of the Federal Emergency Relief Administration, to go around the country and write about how the Great Depression was affecting regular people. Many of her reports led to important changes for people who were struggling. Hickok traveled across the U.S. twice in less than a year during that assignment. After that, she kept working for Hopkins, traveling around the country writing reports, but this time they were about the impact of the government’s Work Projects Administration (WPA). Hickok’s reports featured people who were being failed by the WPA, and she wrote passionately about her disappointment with some of the things the government did. Hickok understood what it was like to struggle financially herself, more than many of her colleagues in Washington did.

Hickok’s next job involved promoting the 1939 World’s Fair. After that, the Democratic Party’s publicity director hired her to interview people around the country about their opinions of FDR and the Democratic Party in the time leading up to the 1940 election. After FDR was re-elected that time, Hickok moved on to her final job, as the executive secretary of the women’s division of the Democratic Party. Her position allowed her to advocate for progressive politics and candidates she believed in, and her work was very important in the lead-up to the election of 1944 (when FDR was elected to his fourth and final term as President). That election was the first time the majority of voters in a presidential election were women.

Hickok retired after FDR’s final re-election, but she still spent most of her time writing. She co-wrote the book Ladies of Courage with Eleanor Roosevelt, and she authored a biography of Eleanor, titled Reluctant First Lady. She also wrote popular chapter books for children, among them The Story of Franklin D. Roosevelt and The Story of Helen Keller.

Hickok had some serious romantic relationships with women, and there is evidence that her relationship with Eleanor Roosevelt may have been romantic. In any case, their strong friendship lasted for the rest of their lives.

Lorena “Hick” Hickok died in 1968 of complications from diabetes, a disease she had survived with for over four decades. Some years later, her reports about the New Deal and the WPA in the 1930s were compiled and edited into a book, One-Third of a Nation: Lorena Hickok Reports on the Great Depression.

Lowitt, Richard, and Maurine Beasley. One-Third of a Nation: Lorena Hickok Reports on the Great Depression. University of Illinois Press, 1981, 1983, 2000.