THEIR STORIES. OUR LEGACY.
She was the first woman in Wisconsin to be a county superintendent of schools.
Learn more about Maud Neprud Otjen 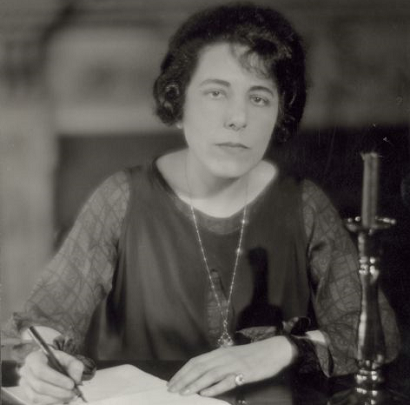 Edna Ferber was born in Kalamazoo, Michigan, in 1885. After living in several different midwestern towns, including Ottumwa, Iowa, where they were scorned for being Jewish, her family settled in Appleton, Wisconsin, when Edna was 12.

Ferber worked on her high school’s newspaper as the “personal and local” editor. She dreamed of becoming an actress and studying elocution at Northwestern University, but her father was ill and the family had hard times financially. Ferber accepted a job offer from a local newspaper editor and became, while she was still a teenager, the first female reporter at the Appleton Daily Crescent, where her salary was $3.00 a week. Later, she wrote for the Milwaukee Journal for four years, until she collapsed from anemia. While she was recovering, Ferber wrote and published a short story, “The Homely Heroine” (1910), which was set in Appleton. Her first novel, Dawn O’Hara, a story about a female reporter in Milwaukee, followed in 1911.

Ferber moved to New York City in 1912 to pursue a career as a writer. Her experience as a journalist in Wisconsin greatly influenced her fiction writing. As a reporter, she had made detailed observations of midwestern society; those observations appeared in her novels and inspired her strong female characters. She became known nationally in the 1910s for a series of stories, first published in magazines, about a divorced mother named Emma McChesney who works her way to the top in the business world.

Ferber wrote many novels over a period of many years. Her novel So Big won a Pulitzer Prize in 1925. Her novel Show Boat, published in 1926, was later made into a Broadway musical by Jerome Kern and Oscar Hammerstein. The novels Cimarron, Saratoga Trunk, Giant, and Ice Palace were all made into films; Cimarron won an Oscar in 1931, and Giant (in 1956) featured movie stars James Dean and Elizabeth Taylor. Ferber eventually made her way back to writing for the stage, collaborating with George S. Kaufman on such plays as Dinner at Eight and Stage Door.

Ferber died in 1968 in New York City. In her obituaries she was called the greatest American woman novelist of her day.