THEIR STORIES. OUR LEGACY.
This Nobel Peace Prize winner was the first female head of state of any African country.
Learn more about Ellen Johnson Sirleaf 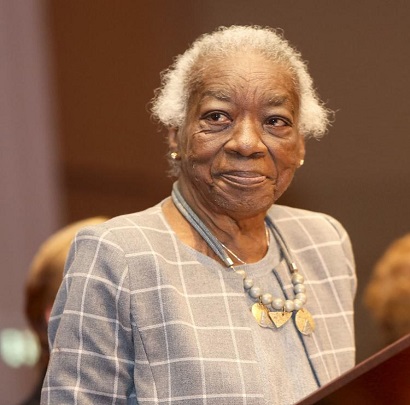 Milele Chikasa Anana was the first Black school board member in Wisconsin and the longtime editor and publisher of the magazine UMOJA.

Milele Chikasa Anana was born in 1934 in Oklahoma City and grew up mostly in Tulsa, Oklahoma. She lived in North Tulsa, a segregated part of the city, which she later described as “a well-knit community” with its own drugstores, police officers, churches, and good schools named after Black heroes. Her mother told her that “no human being is greater than another, no matter what they look like.” When she “went into white society,” however, she encountered racist attitudes and obstacles.

Anana graduated from Booker T. Washington High School near the top of her class, then was accepted into Talladega College, a top HCBU (historically Black college or university) in Alabama, where she majored in English. She went on to graduate school at Purdue University and eventually moved to the Roxbury neighborhood of Boston, Massachusetts. She worked as a teacher, was active in the Boston NAACP, and attended the 1963 March on Washington.

In 1968, Anana moved to Madison with her husband when he joined the staff of the University of Wisconsin’s School of Music. They were the only Black family living in their neighborhood, and at first she felt very isolated, but she found a community in Madison through her activism. She supported students at the University of Wisconsin who demanded that the university create an Afro-American Studies department, and in 1974 she was elected to the Madison school board — the first Black person in the state to serve on a school board. The same year, the mayor appointed Anana as the city of Madison’s first Black affirmative action officer. Her job was to promote equal opportunity for people of color and watch out for discrimination in the city’s hiring practices. She faced intense pushback in that job from companies and unions that did business with the city as well as from City Hall, and she later reflected that those years had been the hardest in her career and the job had been harmful to her mental health. “I didn’t know the city was not ready to offer equal opportunity to Black people for jobs,” she said. After six years in that position, Anana moved to Cincinnati, Ohio, to work for Procter and Gamble (P&G). She fought discrimination in and out of her workplace; this included suing a landlord who refused to rent an apartment to her (she won and the landlord had to pay her $15,000). After working for P&G in Cincinnati and then in Green Bay, Wisconsin, she went into business on her own as a personal computer (PC) trainer in the mid-1980s. She moved back to Madison in 1988 to work in the PC department of Wisconsin Power and Light Company (which is now called Alliant Energy). Later she was hired again by the city of Madison, this time as an information technology (IT) trainer.

In 1990, Anana took over producing a newsletter called UMOJA. She took classes to learn about magazine production and transformed the publication from a 2-page, mimeographed newsletter into a full-blown magazine that featured the work of Black artists on its covers. UMOJA aims to celebrate the accomplishments of the Black community and fight against the negative ways Black people were being portrayed in the media. Anana, who was called a “champion of positive Black news,” conducted interviews, wrote stories, served as photographer, and edited and published UMOJA for almost 30 years; she retired in 2018. She also used her knowledge and experience to mentor more than a hundred young people through internships at the magazine. People in the community called her “Ms. Milele” or “Mother Milele.”

Anana was one of the charter members of Madison’s chapter of the Delta Sigma Theta sorority. Among her many other community contributions, she helped improve the Wisconsin Historical Society’s Black History exhibit, was one of the founders of the Madison Black Chamber of Commerce, and served on the board of directors of the Urban League. She received Madison’s Reverend Dr. Martin Luther King Jr. Humanitarian Award in 2009, and in 2018, she was awarded the Rabbi Manfred Swasensky Humanitarian Award by the Madison Downtown Rotary Club. She died in 2020 and is fondly remembered by the community as “our village mother.”

UMOJA Magazine. Owned since 2018 by UMOJA Magazine-Madison, Inc., a non-profit organization created by the Urban League of Dane County; https://www.umojamagazine.com/.

Yahr, Natalie. “Milele Chikasa Anana, Who Celebrated and Fought for Madison’s Black Community, Has Died.” The Cap Times, May 6, 2020; madison.com/ct/news/local/neighborhoods/milele-chikasa-anana-who-celebrated-and-fought-for-madison-s-black-community-has-died/article_30486ff3-667c-5806-9b7d-1db273040125.html.