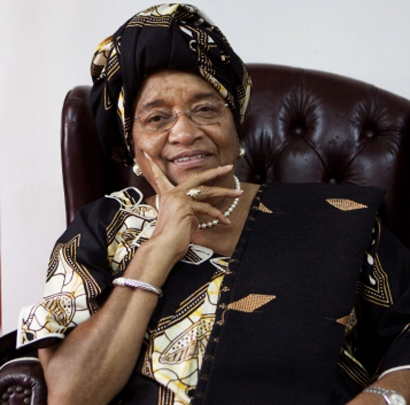 Ellen Johnson Sirleaf was born in Monrovia, capital of the West African country of Liberia. She came to Wisconsin in 1961 with her husband, who studied at UW-Madison, and earned a degree in accounting at Madison Business College. Upon returning to Liberia, she worked in the Ministry of Finance. Later, after she and her husband divorced, she continued her studies in the U.S., first in economics at the University of Colorado and then a master’s degree in public administration from Harvard University. Sirleaf returned to Liberia, where she became assistant finance minister and then deputy finance minister. Finally appointed finance minister in 1979, Sirleaf was the first woman in Liberia ever to hold the position. But when a coup d’etat killed many of the leaders of the administration in 1980, she fled the country. She returned to Liberia briefly in 1985 to attempt a run for vice president, but was arrested and forced to flee again.

After a nonviolent women’s movement forced Liberia’s corrupt leaders out of the country, Sirleaf returned to help restore the government. In 2006, she became the 24th president of Liberia and the first elected female head of state in Africa. Throughout her career, Sirleaf has demonstrated her compassion and commitment, fighting for the rights of women and advocating for education, justice, and equality to provide a successful future for her country. In 2011, Sirleaf and two other women were awarded the Nobel Peace Prize in recognition of their non-violent struggles for women’s rights.