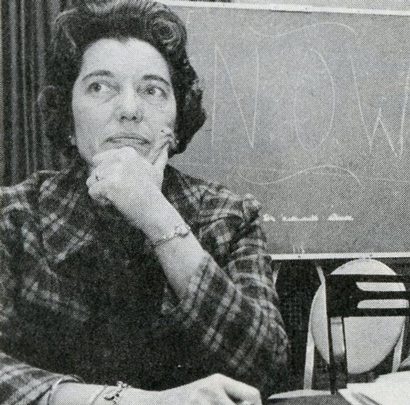 Kathryn "Kay" Clarenbach was a founding member and the first chair of the National Organization for Women (NOW) and won gains for women's rights in state and federal politics.

Born Kathryn Frederick in Sparta, Kay Clarenbach graduated from high school as the valedictorian of her class at age 16. She earned bachelor’s, master’s, and doctoral degrees in political science at UW-Madison. She and her husband then taught at several universities before returning to Madison in the 1950s. Clarenbach taught at Edgewood College in 1961, and also served on the board of trustees of Alverno College in Milwaukee. Starting in 1962, she worked for University of Wisconsin-Extension, creating continuing education courses for women who were seeking a college education and employment during a time when few careers were available to women.

Clarenbach convinced Wisconsin governor John Reynolds to authorize a state commission on the status of women in 1964. Working to change laws that discriminated on the basis of gender, Clarenbach was the commission’s first chair (1964-1969) and served as chair again from 1971 to 1979. She became a leader in the national women’s movement as well, co-founding the National Organization for Women (NOW) in 1966. She chaired NOW’s board from 1966 to 1970 and later served as president of NOW’s Legal Defense and Education Fund. In 1971, along with feminist icons Gloria Steinem, Bella Abzug, and Shirley Chisholm, she helped organize the National Women’s Political Caucus to increase the number of women in elected and appointed office. After governor Lee Dreyfus eliminated the Wisconsin Commission on the Status of Women in 1979, Clarenbach worked for the next four years to establish the Wisconsin Women’s Council to continue the efforts of the commission. She served as a member of the council and continued as a professor at UW-Extension until she retired in 1988.

Segment of “Interview with Kathryn Clarenbach.” Interviewed by Laura Smail.