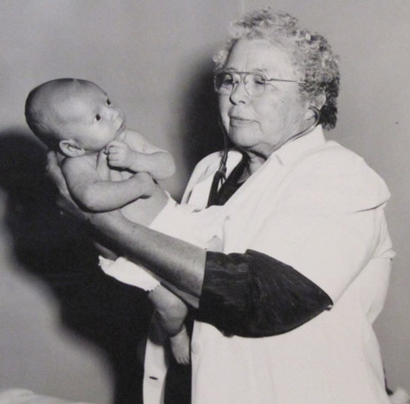 Kate Newcomb, born Kate Pelham in Kansas, grew up in Buffalo, New York. Her mother died when Kate was very young; later on, when a high-school friend also died, she told her father that she wanted to be a doctor. He said no, so she became a teacher, but then she gave that up, too, to help her father after his second wife died. Newcomb eventually convinced her father to let her go to medical school at the University of Buffalo. After earning her M.D. in 1917, she moved to Detroit for an internship at the women’s hospital, working in a section dedicated to unwed mothers. She met and married her husband and eventually moved with him to his hometown of Boulder Junction, outside Eagle River, Wisconsin.

Newcomb stopped practicing medicine for a few years after her firstborn son died in infancy. However, when her town’s need for medical services became too great, she began traveling — often on snowshoes, by canoe, or by snowmobile — to treat patients in the area, and eventually she also set up an office in the town of Woodruff. She was the only physician serving a town of 7000 and its surrounding communities in Northern Wisconsin. She delivered more than 3000 babies in her career and never lost a mother. She also helped to improve the town’s health conditions by cleaning up the water supply and starting vaccination programs.

As she got older, traveling to patients in the harsh weather became more difficult, and she set out to build a hospital. Thanks to donations from patients and community members, construction on the hospital began, but the money ran out before the building could be completed, until students from a local geometry class got involved. They launched a “million penny parade” to raise an additional $10,000 towards construction, and even got Newcomb an appearance on a TV show called “This Is Your Life,” which raised more than $100,000 from donors all over the country. Newcomb’s Lakeland Memorial Hospital opened its doors in 1954. She died two years later, having achieved her dream.