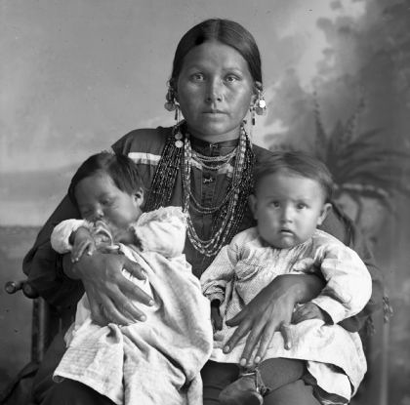 Mountain Wolf Woman's autobiography was one of the earliest firsthand accounts of the experiences of a Native American woman.

Mountain Wolf Woman was born in the Ho-Chunk tribe. She was the sister of Sam Blowsnake, who told his story via an anthropologist in the book called Crashing Thunder: The Autobiography of an American Indian. From 1893 to 1895, Mountain Wolf Woman attended the Bureau of Indian Affairs School to learn English, but then her family removed her from school to be married. As was the custom at the time, her brother chose her husband for her. She ended that marriage in divorce after the birth of her second child. Her brother then proposed another husband, Bad Soldier, and that marriage was happy. Mountain Wolf Woman and Bad Soldier had seven children together.

In 1958, Mountain Wolf Woman consented to tell the story of her life to University of Wisconsin anthropologist Nancy Lurie, a woman she had adopted as her niece thirteen years earlier. That autobiography, Mountain Wolf Woman, Sister of Crashing Thunder, details seventy-five years of Native American life and the role of women in native cultures, and was seen as an important contrast to her brother’s book from thirty-five years earlier. In her autobiography, Mountain Wolf Woman explains how her family was displaced to Nebraska by the U.S. government and later returned to Wisconsin. She also describes her brief stay at mission school, her marriage to Bad Soldier, and her struggle to maintain her family through many hardships.