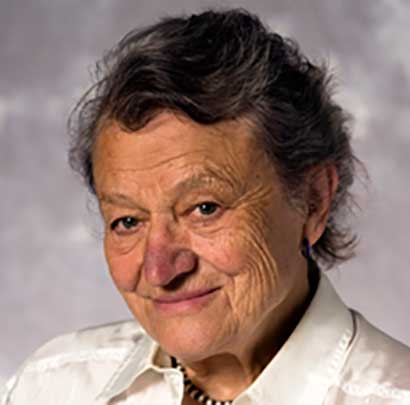 Estella Leopold is a paleobotanist and conservationist who conducted ground-breaking research on fossilized pollen.

Estellla Leopold was born in Madison, the youngest of five children of well-known forester and conservationist Aldo Leopold and his wife, whose name was also Estella. When the younger Estella was eight years old, the family bought a farm along the Wisconsin River, and she grew up helping to restore the ecology of that land. After receiving a degree in botany from UW-Madison in 1948, she went on to earn a master’s degree at the University of California Berkeley and a doctorate at Yale University. She specialized in a form of paleobotany known as palynology, or the study of pollen, especially in fossilized form. Leopold worked for the U.S. Geological Survey (USGS) in Colorado, collecting and comparing fossils from the Rocky Mountains and other places in the U.S. and the world. When developers threatened the rich fossil beds of Florissant Valley near Denver, she spearheaded a conservation effort that led to the area being protected as a national monument.

Leopold left the USGS to join the Quaternary Research Center at the University of Washington, where she documented the fault zone that runs through Seattle and compared vegetation history across the Pacific Northwest and China. In the 1980s, she fought to establish the Mount St. Helens National Volcanic Monument, and in 1982, she and her siblings founded the Aldo Leopold Foundation, which has its headquarters in Baraboo, Wisconsin. Although she retired from teaching at the University of Washington in 2000, Leopold continued to be an active researcher. She has published or contributed to more than a hundred scientific papers and articles in her career. Along with two of her siblings, she is an elected member of the National Academy of Sciences; and in 2010 she was awarded the International Cosmos Prize for her work in conservation.