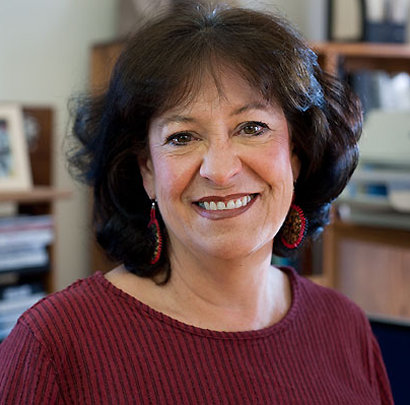 Patricia "Patty" Loew is a celebrated journalist, filmmaker, and educator about Native Americans in Wisconsin.

Patty Loew, a member of the Bad River Band of the Lake Superior Ojibwe, grew up in Milwaukee. She received her bachelor’s degree in mass communications from UW-La Crosse and started her journalism career in La Crosse as a television and radio reporter; then she moved to Madison and worked her way up to the anchor’s desk at the ABC affiliate WKOW-TV. Loew covered state environmental issues as a journalist, and when the rights of tribes to fish Wisconsin waterways became a top news debate, she gave voice to the views and perspectives of native populations as few mainstream journalists had done before.

Loew then pursued master’s and doctoral degrees in mass communications at the UW-Madison. She became a professor in 1999 and two years later published the award-winning book Indian Nations of Wisconsin: Histories of Endurance and Renewal, which is based on almost a hundred interviews with tribal elders and educators. In 2003, she published another award-winning book, a social studies text for children, Native People of Wisconsin. Loew also co-hosted the Wisconsin Public Television program Weekend and produced a number of documentaries focused on Native American history and culture, including one about American Indian war veterans titled Way of the Warrior, which aired on PBS in 2007. Her other documentary titles include No Word for Goodbye, Spring of Discontent, Nation Within a Nation, and Sacred Stick. She has served on the board of UNITY: Journalists for Diversity, which includes the Asian American Journalists Association, the National Lesbian & Gay Journalists Association, and the Native American Journalists Association.