THEIR STORIES. OUR LEGACY.
This trial lawyer was the first female district attorney in Wisconsin.
Learn more about Dorothy Walker 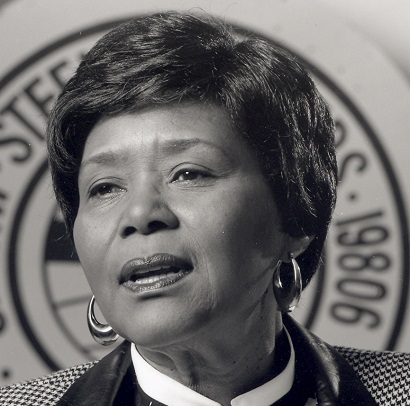 Nellie Wilson spent her life fighting for employment opportunities for women and was the first African American woman to hold a leadership position in her local steelworkers union.

Nellie Sweet was born in Lufkin, Texas, in 1916; her mother died just three years later. Nellie and her father, Durham, moved to Milwaukee in 1928 to avoid the racism and financial hardships of the Deep South. Durham Sweet became active in the local iron molders union and the Negro Improvement Association, and Nellie grew up with a strong sense of black pride.

After she graduated from high school, Nellie married, taking the surname Wilson, and had two daughters. Eventually her marriage ended and she became a single mother, struggling in low-paying jobs and facing racial and gender discrimination. When defense industry jobs were finally opened to African Americans during World War II, Wilson was able to find a better-paying position, working for a steel manufacturing company called A.O. Smith. She became a member and then a steward in the labor union at A.O. Smith and filed many grievances on behalf of women. One of those grievances led to the removal of all barriers to women in that workplace.

In the 1960s, Wilson became the first woman elected to the executive board of her union, and she was a founding member of the women’s committee in the Wisconsin chapter of the American Federation of Labor and Congress of Industrial Organizations (AFL-CIO). After she retired from her job at A.O. Smith, Wilson headed the AFL-CIO’s Human Resources Development Institute, where she placed women, minorities, and veterans in training programs and jobs. She was also a spokesperson for the Minority Affairs Institute in the American Association of Retired Persons.