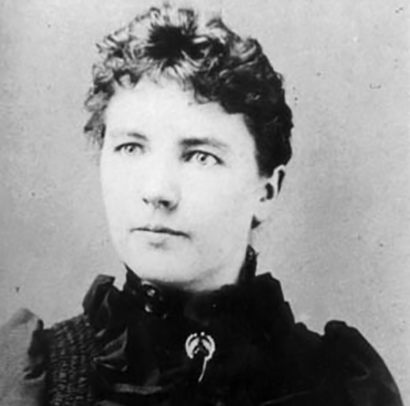 Laura Ingalls Wilder, born Laura Elizabeth Ingalls, was born in Pepin in 1867. The Ingalls family moved to Kansas in 1869, but returned to Pepin two years later. In 1874 the family began moving again – first to Minnesota, then to Iowa, back to Minnesota, and finally to South Dakota, where they settled. Because her family struggled to make ends meet, Wilder worked as a seamstress while still very young. In 1882, at the age of 15, she earned her teaching certificate and started teaching school in a small town near her family’s home. She met her husband there; they married in 1885 and had a daughter, Rose, the following year.

The young Wilder family moved several times before settling on a farm in Missouri. Wilder worked on the farm and was also secretary-treasurer of the Mansfield Farm Loan Association. She later wrote columns for the Missouri Ruralist, McCall’s Magazine, and other publications. Daughter Rose became an accomplished writer and encouraged her mother to write books as well. Wilder wrote her first book at the age of 65 — Little House in the Big Woods, based on her early childhood in Pepin. Her third book, Little House on the Prairie, was based on her family’s years in Kansas; it became the inspiration for a television series of the same name. Wilder published a total of nine books in her series about her pioneer childhood, and eight of them became Newbery Honor books. More than 60 million copies of the Little House books have been sold, and the series has been translated into more than 25 languages.