THEIR STORIES. OUR LEGACY.
She grew up in a family of migrant farm workers and devoted her career to improving the lives of people of color in Wisconsin.
Learn more about Anita Herrera 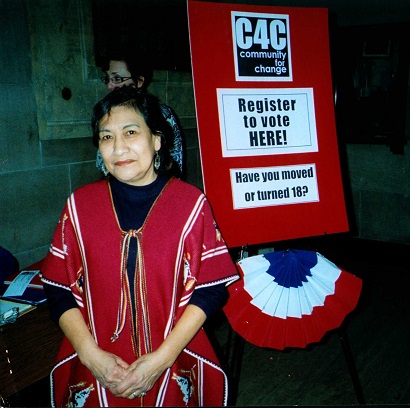 Maria Luisa Morales has worked for justice for Latinx communities in Wisconsin since the 1960s.

Maria Luisa Morales was born into a family of migrant farm workers in Cotulla, Texas, in 1944. At a very young age, she noticed inequality around her. She remembers, for instance, that “migrant workers were not treated very well…. We had no indoor toilet; we had no place to wash our hands…. we didn’t have water.”

When Maria Luisa was five years old, her family settled in Racine, Wisconsin, but still traveled to work on farms in the summer. Everyone back in Cotulla had spoken Spanish, so English was new to her at school. She and her siblings were discriminated against and their names were changed by their teachers; Maria Luisa was now called “Mary Lou.”

After she got married in 1963, Maria Luisa got involved in cultural programming for the Latinx community in Racine, helping with Cub Scouts, Girl Scouts, and church activities and giving rides to women to visit family members in prison. “I wasn’t always as radical as they say that I am,” she insists. But even though she no longer worked in the fields, she was very concerned about the poor and unfair living conditions in a certain neighborhood where migrant workers lived. She helped form a coalition of people who pushed the city council to make conditions better by installing indoor plumbing and paving the streets and sidewalks in that neighborhood. After that, she helped with the migrant movement in other parts of the state, and she fought to change the ways immigrants and families who received aid were treated. She worked with unions to improve wages for workers in the garment industry and even marched with César Chávez in 1991.

Maria Luisa worked for years for an immigrant rights organization called Voces de la Frontera (Voices from the Frontiers). Even after she stopped working there, she kept fighting for immigration reform and helped lead protests to be “a voice for people who can’t speak for themselves.” She served on the board of the Urban League for several years and is “still involved in justice issues, such as voter registration.”