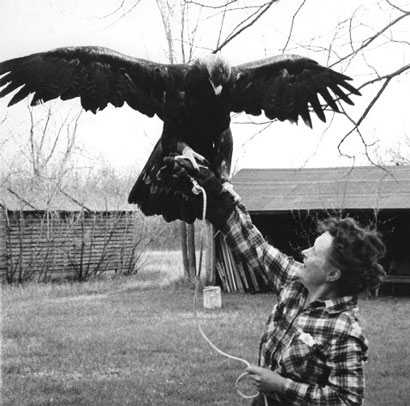 Frances Hamerstrom, an ornithologist who helped save the prairie chicken population in Wisconsin, was the first woman in the U.S. to earn a master’s degree in wildlife management.

Frances Hamerstrom, born Frances Flint in 1907, grew up in a wealthy family near Boston, Massachusetts. She demonstrated an interest in wildlife from a very young age, when, as she later wrote, “grownups forbade wild pets and tried to squelch my companionship with creepy crawly creatures.” Although she flunked out of Smith College because of her interest in “birds and boys,” she graduated from Iowa State College in 1935 with a bachelor’s degree in biology and then studied under famous conservationist Aldo Leopold at UW-Madison, where in 1940 she became the first woman to earn a master’s degree in the young field of wildlife management.

Hamerstrom and her husband Frederick, also a wildlife biologist, helped to stabilize Wisconsin’s prairie chicken population after much of that bird’s habitat was destroyed by farming and other development. In 1949 she became the second woman to work as a wildlife professional in Wisconsin. From then until 1972, she was the assistant project leader of the Prairie Grouse Management Research Unit for the Conservation Department (now called the Wisconsin Department of Natural Resources). After that, she researched raptors (hawks, eagles, and owls), directed the Raptor Research Foundation, and taught at the University of Wisconsin-Stevens Point. She and her husband received many awards, including the National Wildlife Federation’s Special Achievement Award in 1970, and were inducted into the Wisconsin Conservation Hall of Fame in 1996. Hamerstrom remained active as a scientist and writer until her death at age 90. In her 60-year career, she published many scientific articles and wrote many books, including Birds of Prey of Wisconsin (1972), the children’s book Walk When the Moon is Full (1975), and The Wild Food Cookbook (1989).

Hamerstrom, Frances. My Double Life: Memoirs of a Naturalist. University of Wisconsin Press, 1994.