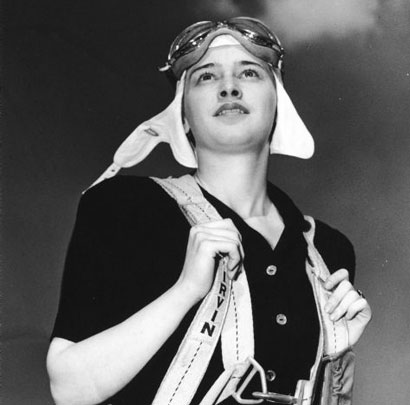 Dickey Chapelle was the first female American war correspondent to parachute with American troops and the first killed covering combat.

Dickey Chapelle grew up in Shorewood and graduated from high school first in her class at the age of 16. She attended the Massachusetts Institute of Technology (MIT) as one of only three women admitted to study engineering. While in college, she also wrote articles about flying and took pictures from planes. Deciding she preferred flying planes to designing them, she moved back to Wisconsin to work at a Milwaukee airfield, and later moved to Florida and took classes in photography.

Chapelle’s lifelong passion for adventure and writing developed into a career as a reporter and photographer. She became one of the first female war correspondents. On assignment to cover World War II nurses, Chapelle talked her way to the front lines to photograph the famous battle on the island of Iwo Jima. Later she worked for the National Geographic. She even took up parachuting in order to cover guerrilla conflicts in inhospitable terrain, and became the first female reporter to win approval from the Pentagon to jump with American troops in Vietnam. In 1965, on assignment with the Marines, Chapelle became the first American woman war correspondent to be killed covering combat in the Vietnam War.

No Job For a Woman. Hurry Up Sister Productions, 2011. Film.