THEIR STORIES. OUR LEGACY.
This openly lesbian member of the U.S. military spoke out against the “Don’t Ask, Don’t Tell” law.
Learn more about Zoe Dunning 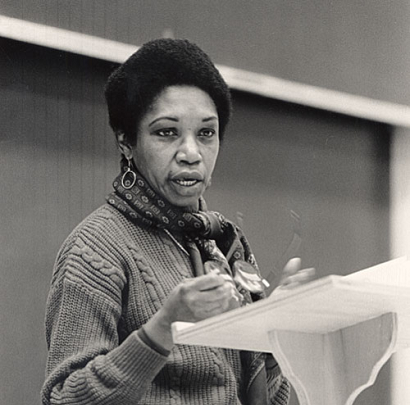 Nellie Y. McKay was one of the first scholars to bring attention to the writing of African American women authors.

Nellie McKay was born Nellie Yvonne Reynolds in Queens, New York, probably in the 1930s, to parents from Jamaica who encouraged all their children to finish high school and go to college. Nellie married and divorced as a young woman. After graduating from Queen’s College (part of the City University of New York) with a B.A. in English literature in 1969, she enrolled in graduate school at Harvard University. While she was studying at Harvard, she also taught at Simmons College, where she became close friends with other Black academic women who taught in the Boston area. Realizing that Black women authors were not being studied in colleges and universities, the group dedicated itself to discovering and teaching about the work of these writers. McKay graduated from Harvard in 1977 with a Ph.D. in English and American literature.

In 1978, McKay started teaching in what was then a new Afro-American studies department at the University of Wisconsin–Madison. In 1984 she earned tenure, which meant that her teaching position at the university would be permanent, and she taught there for the rest of her life, at one point also serving as chair of the department. At the time of her death she was the Evjue professor of American and African American literature, held a joint appointment in the English department, and also taught courses in women’s studies.

McKay’s important contributions to the study of African American literature went beyond classroom teaching to include writing and editing important scholarly works. In 1996 she was co-editor of the very first Norton Anthology of African American Literature. As she told The New York Times, the project was needed “to establish the centrality of the African American experience.” Now in its third, revised edition, this two-volume anthology is a collection of writing by 140 authors in all forms of literature, plus sermons, spirituals, jazz, and hip hop performances, from 1746 to the present. The text has been widely used for more than 20 years, and hundreds of thousands of copies have been purchased.

At the time of her death from cancer in 2006, Nellie McKay was believed to be in her mid-seventies. In an obituary in The New York Times, the chair of her department was quoted as saying that McKay was “the central figure in the establishing of [B]lack women’s studies as a presence in academic and intellectual life.” A lecture series at the University of Wisconsin¬–Madison’s Institute for Research in the Humanities, where she was a resident fellow in 1991–1992, was named for her.